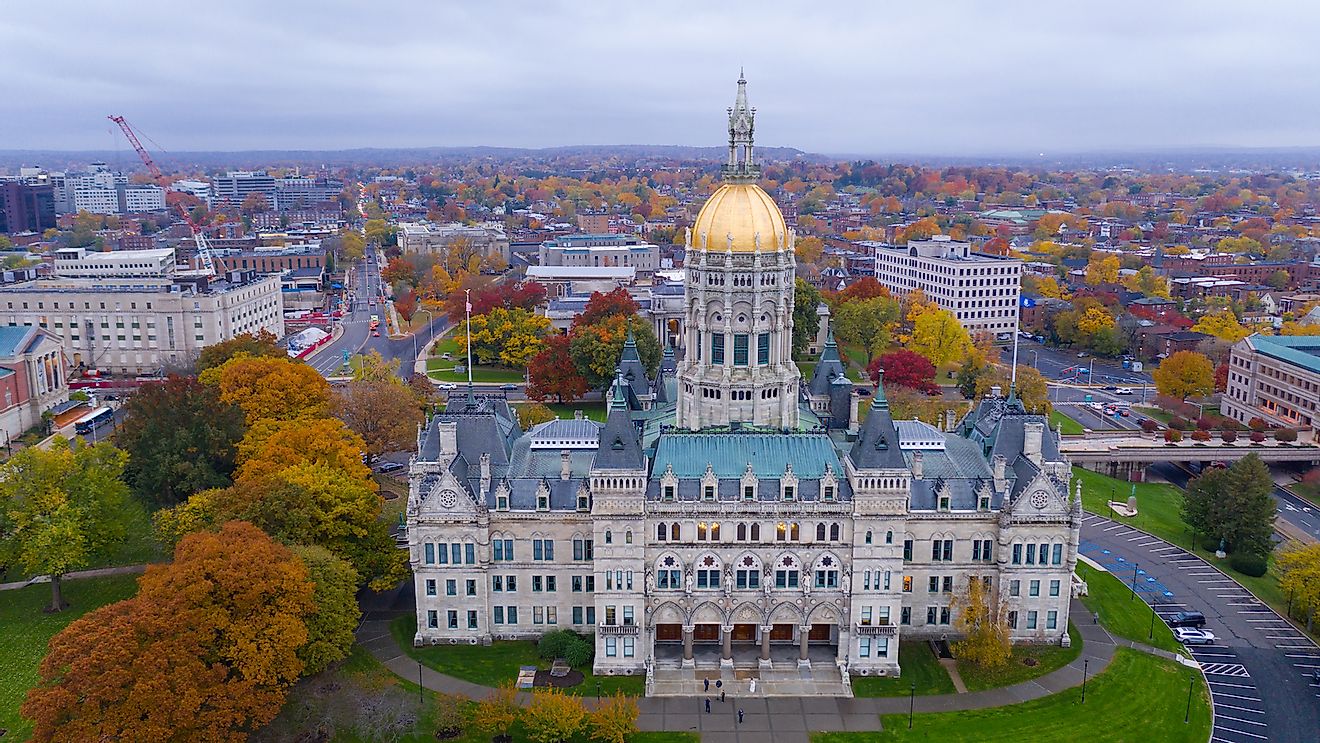 The founders of the Connecticut colony were Thomas Hooker and Governor John Haynes of the Massachusetts Bay Colony. In 1636, Hooker and Haynes led 100 people to settle Hartford. Under the influence of Thomas Hooker, who was a Puritan minister, the settlers passed the “Fundamental Orders of Connecticut”. This document laid out the fundamental governing principals of the colony. Soon after the founding of the colony the settlers entered into a war with Pequot tribe. The settlers vanquished the Native Americans and forced them to surrender.

A separate colony was established in New Haven In the spring of 1638, when that city was founded. In the following two years additional towns were established at Milford, Guilford and Stamford. These cities, together with Southold on Long Island and Branford, became the republic of New Haven. The colonies in Connecticut flourished as separate entities. However, limited hostilities with New Netherlands convinced the colonies to combine. On May 30th 1662, King Charles II gave the colony of Connecticut an official charter. He granted the colony rule under the very constitution that it had approved (based on the Fundamental Orders of Connecticut). In 1687, the governor of New England demanded that the Connecticut assembly disband. Connecticut history developed its own lore when the charter of the state was secretly taken from the assembly and hidden in an oak tree that became known as the “Charter oak”. Two years later Connecticut returned to self-government.

The colony of Connecticut was a producer of wheat, and livestock. It was a significant exporter of lumber and a major shipbuilder. Connecticut was an overwhelmingly Puritan state, with the Puritan Congregational church being the only official church in the colony. Other religious groups were often persecuted.

Connecticut is the southernmost state in New England and one of the richest states in the country. It is bordered to the west by New York, to the east by Rhode Island, to the north by Massachusetts, and to the south by Long Island South. Connecticut is named after Connecticut River which almost bisects it. It is the third-least extensive state in the US with an area of approximately 5,567 square miles and has a population of about 3.5 million inhabitants, making it the 29th most populous state. The state traces its origin to the Connecticut Colony.

Also known as Colony of Connecticut, the Connecticut Colony was an English Colony in North America that eventually became the US state of Connecticut. It was established on March 3, 1636, for the Puritan congregation. The English seized it a year later after a struggle with the Dutch. It was later the scene of a bloody conflict between the Pequot Indians and the colonialists known as the Pequot War. The Colony of Connecticut played a key role in the establishment of self-government in New World by refusing to surrender its local administration to the Dominion of New England. The colony was transformed into a state and admitted into the Union on January 9, 1788, as the 5th state.

The Founding Of The Colony

The founding of the Connecticut Colony is often credited to Governor John Haynes and Puritan minister Thomas Hooker. John Haynes, who was the governor of Massachusetts, led about 100 people to Hartford in 1636. He was also the first governor of Connecticut. Hooker, on the other hand, preached to his congregation in May 1638 on principle of governance, leading to the writing of the Fundamental Orders of Connecticut. The orders were probably written by Roger Ludlow who by then was the only lawyer living in Connecticut, and transcribed into official records by Thomas Welles. New Haven Colony which was absorbed into the colony in the 1660s was founded by John Davenport and Theophilus Eaton.

Born in Essex, England, in 1594, John Haynes was a puritan and a close friend to Thomas Hooker. Together, they founded the Colony of Connecticut. Haynes served as a governor of Massachusetts for one term before moving to Connecticut Colony where he became its first governor and ultimately served eight separate terms (for 20 years, the governorship rotated between Haynes and Edward Hopkins since one could not serve consecutive terms). He has greatly contributed to drafting laws and legal frameworks for both Connecticut and Massachusetts and was among the people that came up with the draft of the Fundamental Orders of Connecticut. He was accused by many for investing a large section of his wealth in Connecticut leading to the ruin of his family back in England.

Thomas Hooker led a section of puritans in founding the Colony of Connecticut after a disagreement with the Puritan leaders in Massachusetts. He was an advocate of universal Christian suffrage and an eloquent speaker. He was a gifted preacher, writer, and one of the founders of the city of Hartford. Hooker was also the first minister of Cambridge, Massachusetts.

Countries Where Mobile Banking Is Most Popular